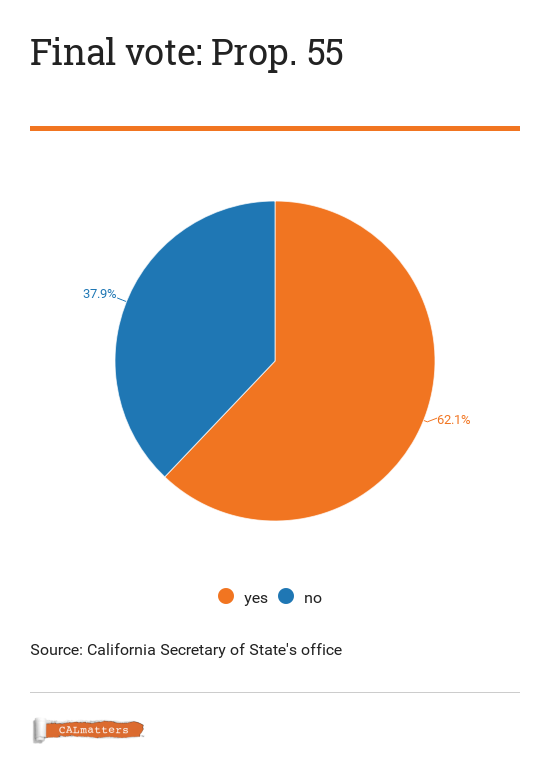 Californians voted to increase taxes on the state’s wealthiest earners in 2012, seeking to replenish education funding accounts depleted during the recession. Four years later, the economy is recovering and the tax increase is slated to end after 2018. Education and health care advocates argue Californians can’t afford to lose the revenues from the high-earner income tax.

Prop. 55 would extend the 2012 voter-approved tax increase on high-income earners for 12 more years, to 2030. The tax applies to earnings over $250,000 a year for individuals, or over $500,000 for couples. Most of the revenue would continue to go to K-12 education, with the remaining set aside for community colleges and low-income health care programs.

What would it cost state government?

Nothing; Prop. 55 would reap billions for the state. The state could see increased revenues ranging from $4 billion to $9 billion a year from 2019 through 2030, depending on the economy and the stock market.

The California Teachers Association and the California Hospital Association are bankrolling Prop. 55 and their constituencies stand to benefit from it passing. Revenues from this income tax are targeted for public schools and healthcare for low-income children. Those programs would likely see cuts if the 2012 tax increases expire.

Prop. 55 maintains taxes on the wealthiest of Californians, and would prevent billions of dollars of cuts to public education needed to hire teachers and reduce class sizes. Funding for community colleges would make more classes available and keep tuition rates stable while low-income children would see improved access to health care.

This measure is a broken promise to taxpayers who voted in 2012 for a temporary tax. Extending the tax by another 12 years is a power grab by labor unions that will send the state’s economy into a tailspin, forcing more businesses and jobs to leave California.