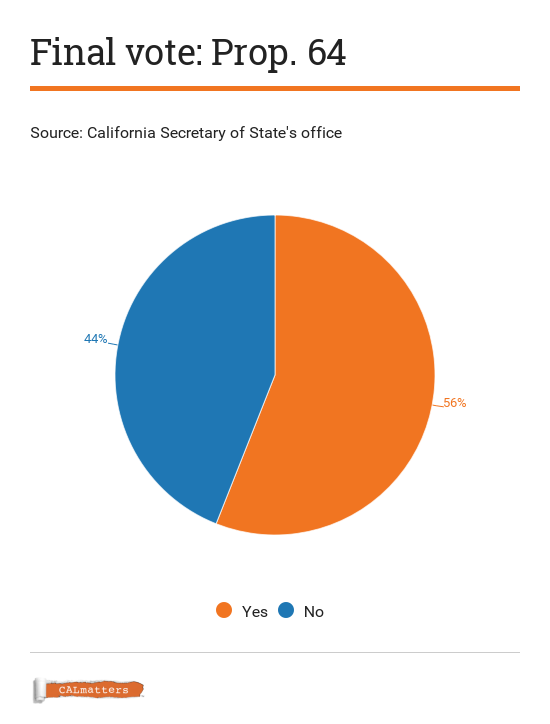 The push for marijuana legalization is on the ballot in at least nine states this November, with California’s Prop. 64 the most watched. Although four other states previously have legalized recreational pot, a vote by the nation’s most populous state is likely to put pressure on Congress and the federal government to revisit the federal ban on marijuana.

Prop. 64would allow people 21 and older to grow up to six pot plants at home, possess up to an ounce of marijuana and use it for recreational purposes. It would allow the state, as well as cities and counties, to regulate and tax the growing and sale of non-medical marijuana.

It all depends on how state and local governments choose to regulate and tax marijuana, whether the federal government enforces federal marijuana laws, and the price and use of marijuana. The state’s legislative analyst concluded that taxes generated could eventually reach more than $1 billion a year. Local and state governments also could save tens of millions of dollars a year in jail costs because marijuana use would no longer be a state crime.

Legalization advocates are trying again after California voters shot down their last initiative to sanction marijuana in 2010. This time they’ve got an influx of cash from technology moguls and political heft from Lt. Gov. Gavin Newsom.

It would bring the state’s booming and unregulated recreational marijuana market under the rule of law, protecting consumers and the environment. It is a recognition that decades of prohibition and aggressive enforcement of criminal laws hasn’t worked.

Marijuana remains illegal under federal law. Prop. 64 would lead to an increase in marijuana smoking, causing more cases of cancer, heart attacks, strokes and other health issues. Children will be exposed to marijuana advertising and the roads will be less safe.

Sean Parker, co-founder of Napster and first president of Facebook