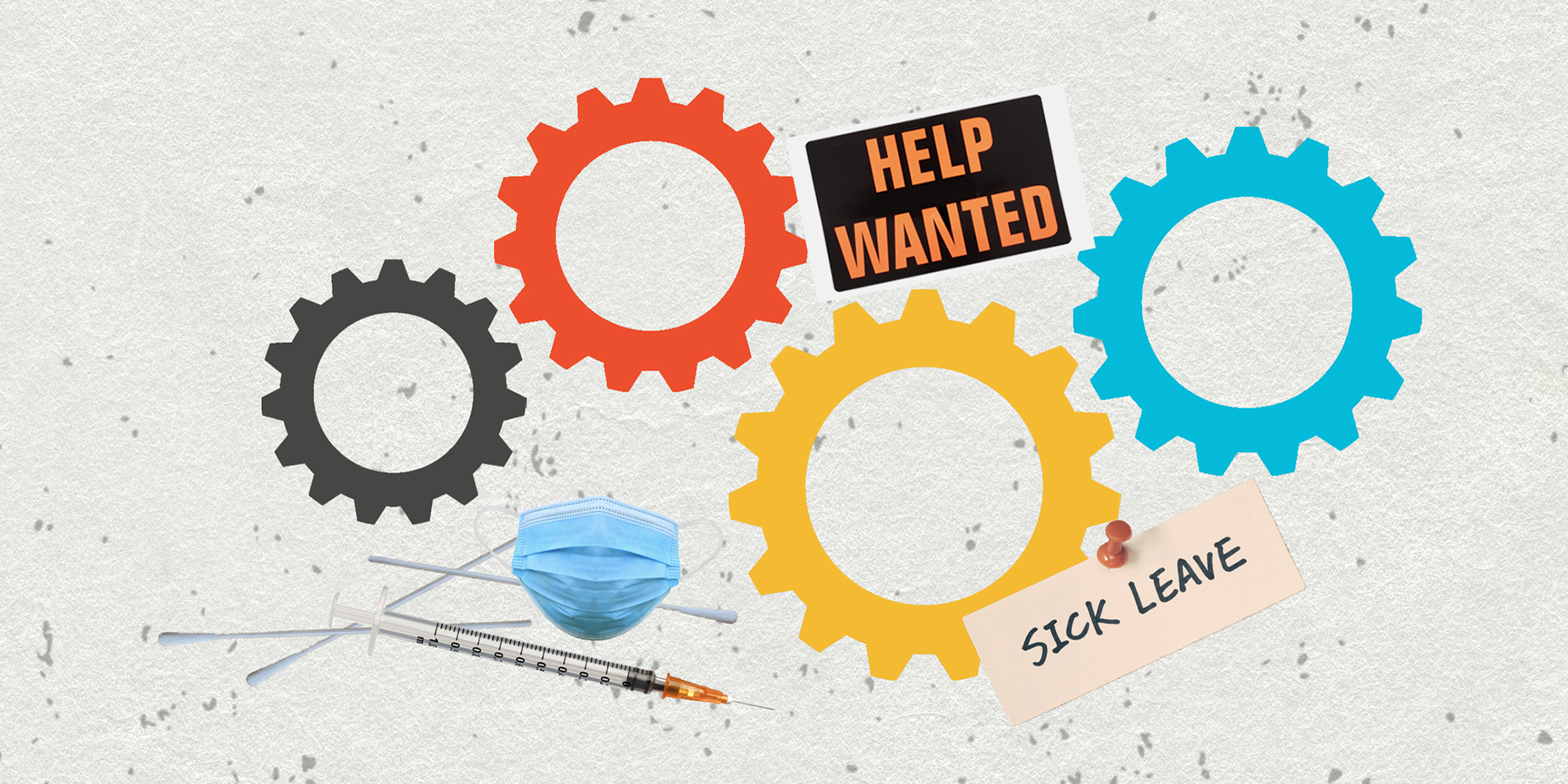 Essential workers say they are bearing the brunt of the pandemic again but this time, there is less government support. Economists say jobs in California’s low-wage sectors could take longer to recover.

Essential workers such as supermarket cashier Brittannie Gulley are once again on the front lines of another COVID-19 surge. Only this time, they’re on the job without the initial policies intended to protect them.

As the pandemic unfolded, California funneled federal emergency unemployment benefits and tapped a budget surplus to help workers stay at home and weather the virus-induced recession. Sick pay benefits that were extended to 10 days for workers who needed to quarantine expired last year, along with other protections.

“I am the sole provider for my children,” said Gulley, a 34-year-old single mother from Norwalk who works at a Stater Bros. Markets grocery store. “I’ll really take a hit if I have to go out: whether I’m sick or I just have to quarantine, there’s nothing for me.”

This year, Gov. Gavin Newsom and legislative leaders, all Democrats, appear poised to reinstate some version of sick pay, though workers, advocates and union leaders fear that those measures are likely to come too late for many facing a fast-moving virus. Stimulus checks were left out of Newsom’s latest budget proposal and there’s been little discussion of an additional unemployment benefits in Congress. A spokesman said Newsom was working with the Legislature on sick pay.

Business groups are pushing back against further mandates they would have to shoulder. California had the highest November unemployment rate in the country, at 6.9%, and new regulations could further hamper the state’s recovery, they said.

“We’re very concerned that this year there’s going to be some overreaction, politically, and that’s going to hurt businesses more,” said Rob Lapsley, president of the California Business Roundtable.

Essential workers in food, agriculture, manufacturing and health care say they fear losing pay just as much as they fear falling ill during the latest omicron wave. Some who get infected are taking unpaid leave or vacation days to quarantine. Others are reporting to work infected, workers and union officials said.

Ingrid Vilorio, 40, who lives in the community of San Lorenzo in San Francisco’s East Bay, said she can’t leave her job working at a Jack in the Box restaurant, despite her fears of bringing the virus home to her family.

“If everybody quit their jobs, in what state would our economy be in?” Vilorio said. “If we all thought that way, well, California would be completely shut down.”

Economists said the omicron variant could mean more pain for California’s low-wage workers who were already struggling to make ends meet before the pandemic started. Unable to pivot to remote, work-from-home arrangements, these workers experienced the worst job losses at the outset of the pandemic and are lagging in the recovery.

Before the omicron wave arrived, low-wage sectors such as leisure and hospitality were 517,000 jobs short of their pre-pandemic levels, according to a California Department of Finance analysis of employment data through November. That compared to 309,000 fewer high-wage sector jobs over the same period.

Low-wage workers who lost their jobs at the onset of the pandemic may face more barriers than high-wage workers. Others remain sidelined by lack of child care and transportation.

Nearly two years into the pandemic, workers are feeling burnout and exhaustion with uncertain schedules that can’t accommodate another round of remote learning or having infected children quarantine at home. Various reports have tracked the pandemic’s negative impact on working mothers, sometimes sending middle-class families into poverty.

Christopher Thornberg, founding partner of research firm Beacon Economics, said that an upside of the omicron variant is that it was relatively mild. That, combined with its virulence, could help both society and the economy finally kick the pandemic.

“Omicron may be exactly what we needed,” Thornberg said. “It’s relatively mild and incredibly contagious, which means it’s going to rip through the population relatively quickly.”

Nevertheless, workers remain nervous. Maria Amaya, 38, a maid who works at the SLS Hotel in Beverly Hills, said she had a colleague who worked several days with a cough, refusing to get tested, before she ultimately tested positive for COVID-19 and was sent home to quarantine.

“The wellbeing of our employees and guests is of paramount importance. If an employee reports illness, we undertake specific protocols,” Alex Herron, a spokesman for the hotel, wrote in an email. “In addition, we continue to follow health officials guidelines regarding coronavirus, and take numerous steps throughout the hotel to enhance guest and employee safety.”

Amaya said she is concerned not only about spreading the virus to her children, ages 13 and 8, but also about infecting her elderly aunt, who often looks after her kids.

The latest wave is also hitting workers outside of low-wage industries. Cristiana Delgadillo caught her third case of COVID-19 days before New Year’s Eve. She’s convinced she got sick at the office. The hardest part, she said, was tapping her vacation days to quarantine.

“It kind of sucks,” said Delgadillo, a 48-year-old car dealership clerk from West Covina. “I actually use them for vacation, not, you know, for COVID.”

This article is part of the California Divide project, a collaboration among newsrooms examining income inequality and economic survival in California.

Alejandro joined CalMatters from The Wall Street Journal, where he covered the West Coast for eight years. He previously wrote about housing and real estate for the Los Angeles Times and The Washington... More by Alejandro Lazo