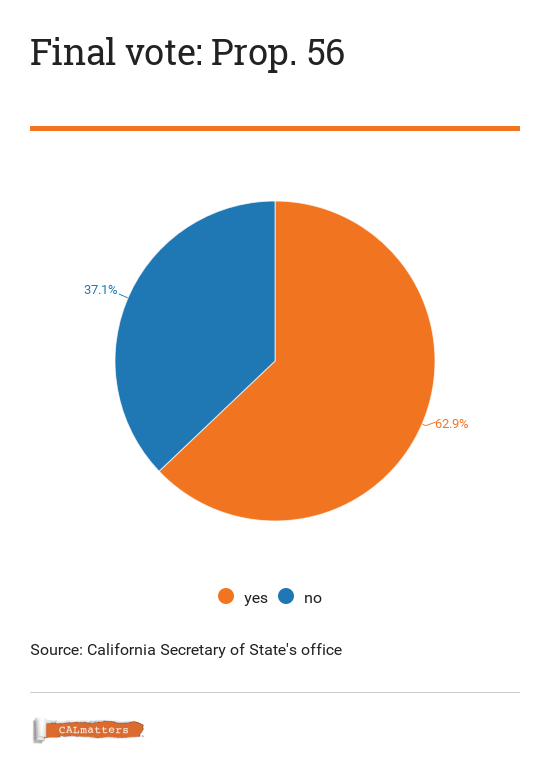 Tobacco is often the target of politicians seeking money for state programs, with mixed success across the country. In California, voters have rejected multiple ballot box attempts over the years to raise taxes on cigarettes, and the state is among those with the lowest taxes on tobacco. The growing popularity of e-cigarettes and vapor products adds a new dynamic to the debate.

Nothing; this measure would add revenue to the state budget. It would provide an estimated $1billion to $1.4billion in 2017-18, with potentially lower revenues in future years.

Prop. 56 is sponsored by a coalition of healthcare groups that could stand to see a boost in Medi-Cal funding if it passes. The measure is one of three on the November ballot that would increase Medi-Cal funding, which healthcare advocates say has yet to recover from cuts the Legislature made during the recession.

Prop. 56 is a user fee paid only by smokers to help pay for healthcare, cancer treatment, smoking prevention, and research to cure cancer and tobacco-related diseases. Taxing tobacco saves lives with a proven reduction in youth smoking. California’s current tax on cigarettes—87 cents per pack—is low compared to most states.

This measure is a tax grab by insurance companies, labor unions and hospitals, with just a fraction of the money set aside for smoking prevention. More pressing problems like the drought, education, road repairs and violent crime should benefit from any tax increases.