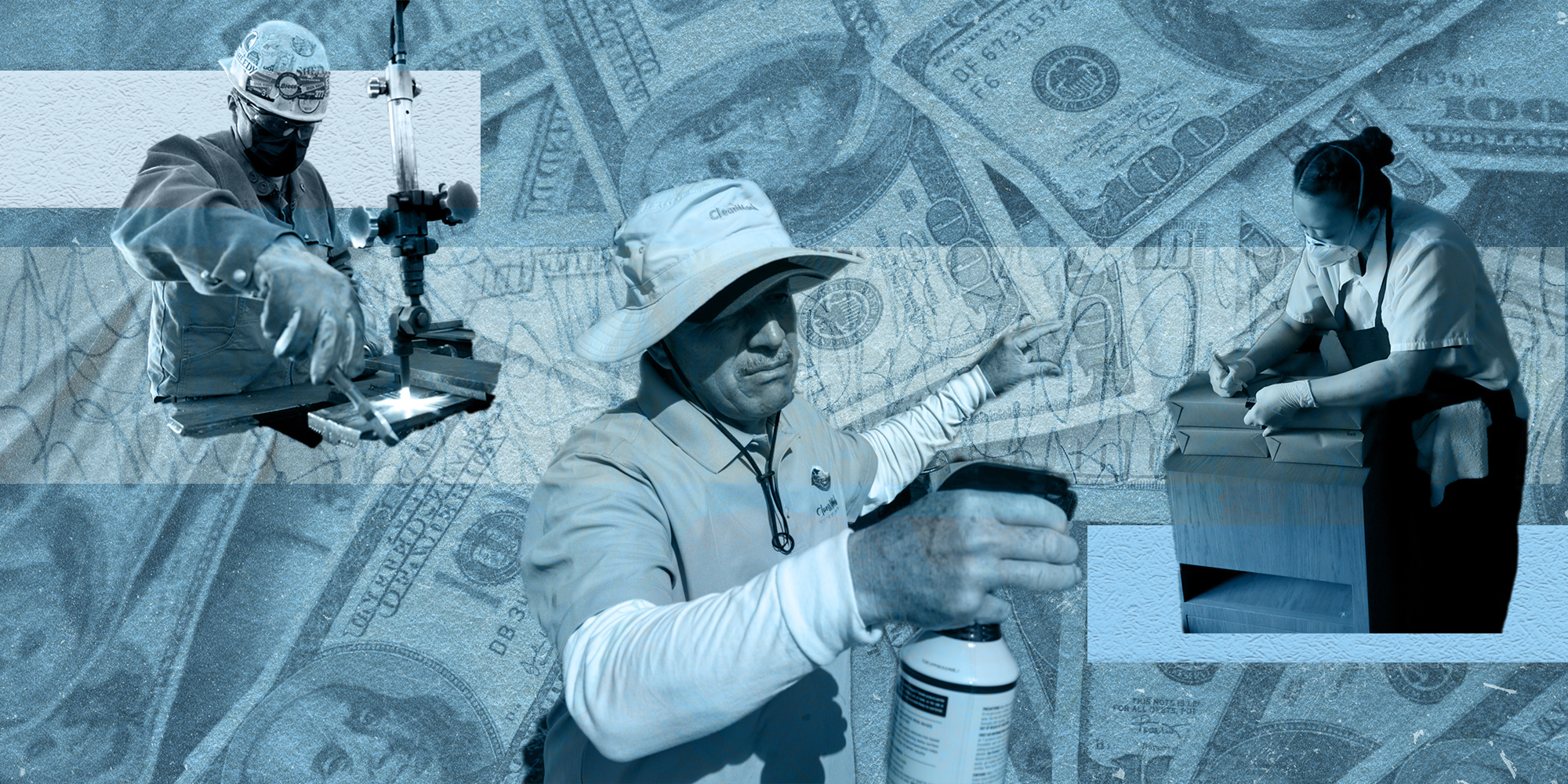 Some of the lowest wage workers are getting their livelihoods stolen by their own employers.

Employers deny workers overtime premiums, ask them to work “off the clock” or take their tips.

In California, workers lost nearly $2 billion from not being paid the minimum wage in 2015, according to the Economic Policy Institute, a left-leaning think tank.

Most often the victims of wage theft are women, immigrants and people of color, researchers say; many work in restaurants, construction, hotels, car washes, garment businesses, farms, warehouses, and nail salons. These workers are among those who bore the brunt of job losses during the pandemic and have the most ground to make up.

For years, California’s lawmakers have tried solving the wage theft problem by strengthening labor laws. Most workers who file wage theft claims wait months or years before getting a resolution; only a fraction who prevail get repaid lost wages.

Usually no one goes to jail for the theft.

Last year California made most wage theft a criminal offense. It also did away with the garment industry’s system of paying workers by the piece instead of by the hour. Now lawmakers are considering creating a statewide council to set wage and work conditions for the fast food industry. Here’s what you need to know about wage theft in California.

The information, charts and data on wage claims have been updated after the Labor Commissioner’s Office provided more complete information to CalMatters in response to a public records request.

What is wage theft?

The Economic Policy Institute has cited other examples, such as an employer taking illegal deductions, confiscating tips or failing to pay tipped workers the difference between their tips and minimum wage, and misclassifying employees as independent contractors to pay a wage lower than the legal minimum.

How big is the problem of wage theft?

One way to look at it is how much workers try to recover in unpaid wages.

The number of wage theft claims are down but their value has grown. In 2020, the Legislative Analyst’s Office reported workers were filing 30,000 claims a year on average, totalling more than $320 million annually. Workers were recovering about $40 million, or about one-eighth, of those claims, the LAO said.

The California Chamber of Commerce said most businesses pay workers fairly, that wage theft claims are a fragment of a percent of California’s $1 trillion-a-year payroll. Economists who study the issue say wage claims data doesn’t tell the whole story because many workers don’t report the violations.

Wait times: How long does it take to get back stolen wages in California?

The state violates its own deadlines with wage theft cases.

By law the individual wage claims workers file with the Labor Commissioner’s Office are supposed to reach a hearing in 120 days. Then the office gets 15 days to decide whether or not the worker is owed money and how much.

That can become a court judgment allowing the worker to claim the money.

While the vast majority of cases settle before the hearing, other workers have faced long delays just to get a hearing before the Labor Commissioner’s Office. The average case filed last year that actually got a decision took double the time allowed by law. Thousands of cases filed in 2021 remain pending.

This chart measures the time between a worker filing a claim and the Labor Commissioner’s Office decision. CalMatters obtained data on these claims through a public records request.

Who is impacted most by wage theft?

Wage theft is most prevalent in low-wage industries, according to advocates who say such workers often are not unionized and are reluctant to endanger their livelihoods by objecting to the theft.

Many of these jobs, other than construction, are service-sector jobs with a history of employing immigrants or minority workforces.

What does wage theft cost a typical worker’s family?

An Economic Policy Institute report found California workers who were victims of minimum wage theft — who were paid less than the legal minimum wage — lost out on $64 in pay a week, or about $3,400 a year in 2015, the most recent data available. Adjusting for inflation, that’s about $80 stolen each week, or $4,250 a year, based on June’s record 9.1% inflation rate.

For workers in low-wage industries, that means less food on the table, a harder time paying rent, or delayed trips to the doctor.

A week’s worth of stolen wages can mean an empty 12-gallon gas tank in a car.

Ironically, a year of stolen wages used to equate to a year of groceries for a family of four, but not this year. According to the Bureau of Labor Statistics, now it would pay for only 75% of that typical family’s annual grocery bill.

Contracting allows big firms to escape liability for wage theft, advocates say, because the big firms hire contractors, who directly employ the workers and are often accused of wage theft.

If they were jointly liable, then the larger firms would be legally on the hook for any unpaid wages along with their contractors and subcontractors.

How do California workers get their money back?

California law allows workers several ways to accuse employers of wage theft and to open a case for recovering alleged losses. The vast majority of claims are made by individual workers in an administrative hearing system run by the Department of Industrial Relations’ Labor Commissioner’s Office. In theory it’s intended to be a quick, inexpensive, accessible way to resolve complaints without needing to go to court, with opportunities to settle each step along the way.

–Filing a complaint with the Bureau of Field Enforcement. The bureau, which also falls under the Labor Commissioner, conducts larger investigations of workplaces and issues citations or brings suits against employers that it says committed wage theft. The bureau relies on complaints and testimony from workers. Unlike the individual wage claims, these cases tend to be worksite-wide, and the bureau targets specific industries, some of which were picked by the Legislature.

–Filing a lawsuit. A worker can file a private lawsuit against the employer for labor law violations. This is relatively rare, because it involves the worker hiring an attorney. If a worker finds a lawyer willing to take it on, the worker also can file suit under the state’s Private Attorney General Act, which lets a worker sue the employer on behalf of the state. This takes the burden off the state to conduct its own investigation of every complaint, and the worker could represent all coworkers without having to get a judge to deem it a class action.

Where do people most often file wage theft claims?

Workers file wage claims based on where they performed their jobs, legal experts say.

A CalMatters analysis of claims filed with the Labor Commissioner’s office shows San Bernardino and Los Angeles – two cities with millions of low-wage workers in warehouse, garment, restaurant, and other industry work – had the highest numbers of individual wage claims.

The data paints a partial portrait of where wage theft occurs across the state. It includes claims at the Wage Claim Adjudication unit for 2021 gathered from the department’s search portal and from a public records request. It does not include the Bureau of Field Enforcement cases, which involve multiple workers at individual employers.

Video: A costly crime in California

CalMatters is collaborating with CBS News California to investigate wage theft in the Golden State.

In the first of a series of television companion pieces, investigative reporter Julie Watts introduced viewers to the issue of wage theft through the lens of a long-time restaurant worker.

Have you experienced wage theft?

If you suspect your wages are being stolen, you can start by reaching out to your employer or manager to see if they can address the issue.

But if you’re routinely not allowed to take your meal or rest breaks, and if your employer takes away the tips you’ve made, you may want to seek help outside your workplace.

Advocates suggest keeping track of the hours and dates you work. Hold on to paychecks and pay stubs; you may need copies if you choose to submit a claim. Also, keep a log of any correspondence between you and your employer about the suspected wage theft.

Another option is to contact one of California’s 30 worker centers or organizations like the Garment Worker Center or the Warehouse Worker Resource Center, which help workers build their claims or connect with other workers who had wages stolen. Depending on the claim, a worker center may bring the case to the Labor Commissioner to trigger a Bureau of Field Enforcement investigation, which would require workers to give testimony.

You also may file a wage-and-hour complaint with the U.S. Department of Labor, which operates regional offices throughout the state.

Neither the California Labor Commissioner nor the U.S. Department of Labor will ask about immigration or citizenship status.

Alejandro joined CalMatters from The Wall Street Journal, where he covered the West Coast for eight years. He previously wrote about housing and real estate for the Los Angeles Times and The Washington... More by Alejandro Lazo

Jeanne returned home to California to cover the state's economic divide for CalMatters. She previously covered Missouri government and politics for The Kansas City Star, local and state government for... More by Jeanne Kuang

Lil Kalish’s reporting, from Myanmar to the deserts of southern California, has appeared in the Guardian, LAist, Bitch Media, ARTnews, and other outlets. Before joining CalMatters, they were a fellow... More by Lil Kalish